Oh good. The tacky engaged charter guest still has yellow finger nails, and somehow they look even tackier this week. Lets hope she gets a mani before the engagement photo shoot.

It looks better in the daylight, says no one ever

Has anyone else noticed that Captain Lee wears an excessive amount of gold jewelry?

Emilys fake crush on Ben is about as believable as Trump saying he respects women.

This is the third consecutive week that Ben has talked about Ambien and/or generic sleeping pills. Do we need to intervene?

“I’m currently single, but I have this guy on land.” Now I have heard of the zip code rule before or having hoes in different area codes, but I have never heard of the land vs. sea rule for hooking up.

Is nobody else concerned by Captain Lee just lurking off in the distance, watching these guests swim? No? Just me? OK.

Captain Lee, calm the fuck down. It is not the end of the world where a golfing tee gets placed.

I feel like Kelley is one hormonal fluctuation away from getting fired. Tread carefully, Kels.

I get the feeling Sierra only understands about 50% of what everyone else on the boat says and the rest of the time she just smiles and opens her eyes really wide.

Tacky nail lady tackies it up even further with the same shade of bright orchid lipstick I wear to raves. Keep it up, lady.

OMG I cannot wait for the moment where Kelleys heart gets broken. If I had tivo I would definitely pause record that shit. I feel it would look something like this.

Someone push this bitch off the boat rn.

I cant decide who pulls off a better Elvis, Nico or me from 2008. I would have to go with me, but I may be a little biased.

Im sorry, but who pays a hundred grand to have a cheesy themed party on a boat? And who are these people who want to have a dance party with their families? If I wanted to drink and dance with my family Id go to my cousins bar mitzvah.

Ben: Oh Emily youre way above taking out the trash even though its your job.

We’re 20 minutes in, and so far all Emily and Ben have talked about is their sleeping habits and garbage. #RelationshipGoals

Fuck, watching this show just makes me hungry. Next time Ill have to hire a private chef before I do this recap. I can write that off as a business expense, right?

Kyle: So I was homeless and juggled on the streets of London for this girl with a good job, but then she dumped me for a rich South African doctor. Nice girl, right?

I mean, can you blame her mate?

Kate: This is so romantic. You were living homeless in London trying to make a life with this girl.

???? Kate, do you need a dictionary, because that is not what romance looks like.

Kate: Sierra, this is an intervention. You have to give Kyle a chance. He is courageous, generous, kind-hearted…

What the FUCK. On the one hand, props to Kate for being the best wing woman of all time. On the other hand, you cannot hold an intervention for forcing your friend to go out with a guy she doesnt want to. Thats not okay.

Sierra: Im more focused on whats in a guys ears than whats between his head and his knees.

I highly doubt that, Kelley, but okay. Not something I would be proud of saying even in private or in my own thoughts, let alone on national television.

Kelley after a few shots:

Lauren and Nico when they hear Emily is going on a date with Ben:

Sierra drinking wine out of a Solo cup is me at all times.

Kyle: Sierra lied and didnt tell me she had a boyfriend
Ben: Did she make you feel special at least?
Both of them: 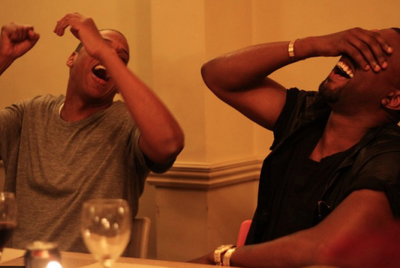 Kelley: How was texting your bf all day?
Sierra: Well hes not technically my boyfriend yet so LAWYERED!

Ben and Emily’s date looks terrible. They’re talking about dill. DILL. It’s like the worst fucking herb there is. This has to be one of the most awkward dinners ever. I guess its true what people say, you cant be both hot and smart.

Kelley: You lied to Kyle about having a boyfriend
Sierra: WRONG *Hillary Clinton smirk*

Like yeah ok its not Kelleys business but also like cmon texting on a date is rude, texting another dude on a date is just fucked.

OK Lauren I love you but wearing the same peasant-style maxi skirt out every week is not helping your love life.

Holy shit, Emily and Ben are holding hands. This is serious.

Ben asking Emily if he can kiss her in French is making me vom rn.

Nico: I’m stuck in the middle of all these emotions and I just want to order a pizza and go home.

Another serious question. What’s worse: Dropping half-eaten piece of pizza in the hallway and Captain Lee finding it OR wasting a perfectly good slice of pizza?

This boat might literally blow up because of this deck crew.