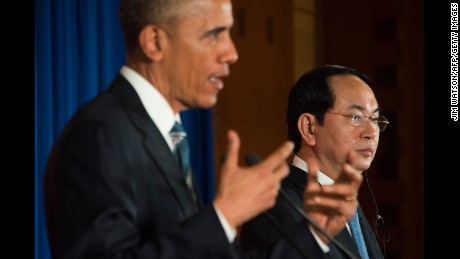 ( CNN) President Barack Obama’s announcement Monday that the report was lifting the ban on the sale of weapons to Vietnam sent one message to the former U.S. wartime foe and the other to the region.

By objective the ban, the U.S. is signaling its desire to leave behind decades of tense post-war relations with Vietnam and start a new phase of closer economic and military ties — one facet of the “rebalance” toward Asia that’s central to the president’s foreign policy legacy.
Obama lifts limbs ban on Vietnam Will lifting ban create tensions with China? Vietnam defense spending rising fast View from both sides of Vietnam War U.S and Vietnam: Unlikely friends Opinion: From enemy to partner

How the U.S. is at the center of the global arms trade